Fun With the Firefighters at a Fundraiser

You are here:
News 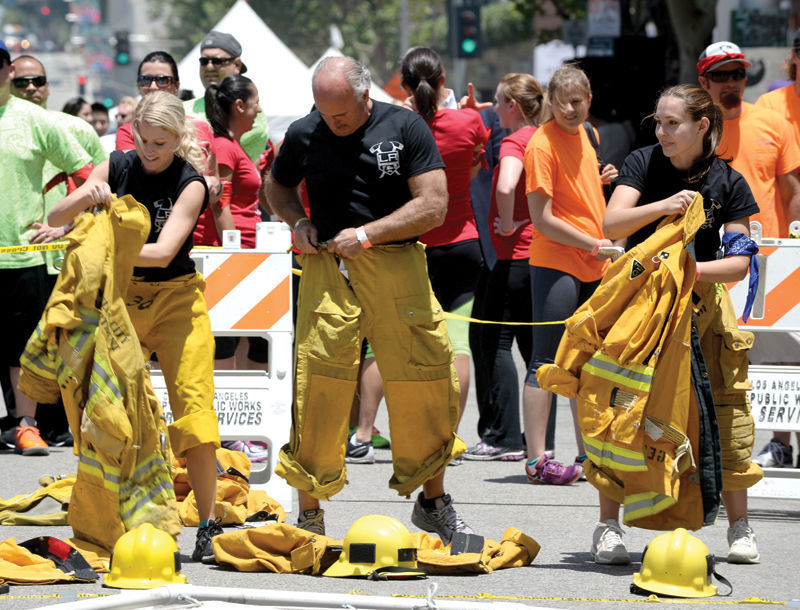 DOWNTOWN LOS ANGELES ­ Many children dream of growing up to become firefighters. While few ultimately realize that ambition, an event in Downtown this week allows some of them the next best thing: the opportunity to don fire gear, carry hoses and get up close with some of those who take on one of the world’s most dangerous jobs. It all happens in Hope for Firefighters. The 18th annual event takes place from 11:30 a.m.­2:30 p.m. on Thursday, June 4, on Hope Street between Third Street and Hope Place.

Hope for Firefighters gives the public a chance to thank those who risk their lives on a daily basis, while also raising money for the Los Angeles Fire Department Widows, Orphans and Disabled Firemen’s Fund. Last year’s event brought in more than $100,000, said Juan Albarran, a firefighter and president of the beneficiary.

Highlights include food prepared by the firefighters, LAFD merchandise, a silent auction and a series of muster games, which simulate old­fashioned firefighting techniques.

One game in particular, the “bucket brigade” relay, is commonly a soaking wet charade. That won’t be the case this year, however, said David Ortiz, committee chairman of Hope for Firefighters.

“We’re using dry cement instead of water to mimic the weight in the buckets,” Ortiz said. “We want to make sure we’re responsible and careful with our water use during the drought. The games will still be just as fun as before.”

The event is timed to capitalize on Bunker Hill office workers on their lunch break. Organizers anticipate about 5,000 people attending, and Albarran said they hope to surpass $100,000 again this year. Admission is free, but attendees pay for food and merchandise.

The proceeds cover the costs faced by injured or disabled firefighters and their surviving family members in the case of death. Money has gone toward the purchase of wheelchairs, paying for hospital stays and treatments not covered by insurance, Albarran said. That coverage is important for Albarran, though he also stressed the community theme of Hope for Firefighters.

“Normally we’re in the fire trucks taking care of an emergency, then heading back to the station as quickly as possible to become available for another emergency,” said Albarran, an LAFD firefighter for 35 years. “This event allows us to be a part of the community and interact with the people we serve in a casual setting.” While the games generate crowds, for many attendees it’s all about the food. Ross said the cuisine this year, all prepared by firefighters, will include pulled pork sandwiches, tri­tip, fish tacos, empanadas, chicken and waffles, desserts and smoothies. Food from 25 stations will be judged at the event by local chefs. There is also a competition for best food booth decorations, Ross said.

While the firefighters share a certain camaraderie by virtue of all being in the same profession, Albarran said that they take the food very seriously.

“We’re pretty competitive, so it’s natural for us to compete when it comes to our cooking,” he said. Still, Ross noted that the community spirit wins out over this friendly culinary rivalry. She said she is always encouraged by the sight of so many people showing up and expressing their admiration.

Plus, she said, the firefighters work very hard to protect the public, and deserve the chance to have a little fun.

“Everyone is thankful for the fire department and they want a chance to give back and show their appreciation,” Ross said. Hope for Firefighters is June 4 from 11:30 a.m.­2:30 p.m. on Hope Street between Third Street and Hope Place. More information at hopeforfirefighters.org.